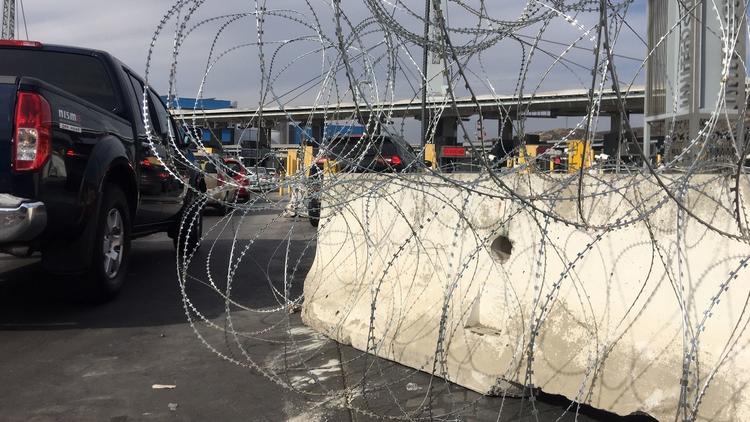 As Customs and Border Protection continued to fortify the San Ysidro Port of Entry Monday by temporarily closing lanes to install vehicle and pedestrian barriers, the general overseeing the military deployment along the U.S.-Mexico border said troops may soon be heading home.

Some 1,300 troops have been assigned to support operations along the California-Mexico border and began arriving Nov. 8. The troops have been busy placing concertina wire and other barriers to limit access to the ports of entry.

But Army Lt. Gen. Jeffrey Buchanan, in charge of the deployment, told Politico that the military’s mission is complete and that engineering and logistics units putting the barriers in place will be returning home as early as this week. The rest, he said, would be done by Dec. 15. CNN reported that President Donald Trump would be granting the remaining troops the authority to protect CBP personnel should they face violence.

Buchanan’s announcement comes as migrants from a Central American caravan continue to arrive in Tijuana. More than 2,500 are in a Tijuana municipal shelter with thousands on the way. The mayor of Tijuana said the total could top 10,000 based on information from the Mexican government.

Tension has been high at the border and protesters in Mexico have demanded that the caravan — most of them Hondurans — return home. On Sunday, an anti-caravan march of about 1,000 people confronted riot police who blocked the shelter where the migrants have been staying.

Early Monday, based on a report that caravan members might try to rush illegally through the port of entry, CBP closed the San Ysidro Port of Entry and halted pedestrian traffic at the San Ysidro Pedestrian East facility between 3 a.m. and 6 a.m.

The closures made vendors on both sides of the border anxious about the impact it could have on the economy during the busy holiday shopping period.

German Vicente, an ice cream vendor who works in the Mexican side of the San Ysidro border crossing, earns half his annual income between November and December. That is why Monday morning’s temporary closure shook him.

“I’d be done if they close the border,” said Vicente, 38. “There wouldn’t be any work here. This is how I support myself.”

Vicente is just one of hundreds of street vendors who depend on the tens of thousands of cars who cross through the Port of Entry every day. They sell ice cream, gum, soccer jerseys, stuffed animals, blankets and other knick-knacks to motorists waiting in line to cross the border.

German Vicente, 38, earns a living by selling ice cream to motorists waiting to cross into the United States through the San Ysidro port of entry. (Gustavo Solis / San Diego Union-Tribune)

On a good day, vendors run up and down the vehicle lanes trying to keep up with cars who ordered something but moved down the line.

On Monday, people were angry.

What is normally a one-hour wait to cross the border Monday morning was a three-hour wait after Customers and Border Protection officials temporarily closed all vehicle lanes. Ten lanes remained closed throughout the day.

Monday’s delay meant Estella Hernandez, 56, was late for her job in a Chula Vista jewelry store.

“I’m never late,” she said while waiting in stop-and-go traffic. “I could lose my job.”

Lane closures carry significant economic consequences on both sides of the border, said Jason Wells, CEO of the San Ysidro Chamber of Commerce.

Like the street vendors on the Mexican side of the border, the outlet malls on the U.S. side make most of their money during the holidays.

“What the stores make in a year, they also make between November and January,” Wells said. “And 95 percent of their customers come from Mexico.”

Wells said he supports CBP’s mission of securing the border, but he believes the federal agency could do a better job of balancing national security with economic interests.

“The fact that they are keeping 10 lanes closed during this ordeal is not something we support or think is necessary,” he said.

Wells added that uncertainty impacts the stores as much as reality. If potential customers in Mexico are concerned about possible closures or long wait times they won’t cross the border to shop.

During an anti-caravan march in Tijuana Sunday, several demonstrators cited possible border closures as the main reason they opposed the migrants living in the city.

“I’m scared and worried,” said Tijuana resident Alejandra Garcia, 52. “What will happen to Tijuana if they close the border like Trump threatened to?”

Customs and Border Protection recommended that people traveling into the United States should anticipate possible increased wait times because of the lane closures. The agency did not say how long the closures will last.

It is also unclear how long the migrants will stay in Tijuana and how many of them plan to request asylum in the United States.

On Monday, the Tijuana Police Department announced that they arrested 34 caravan members for various charges including drug possession, drinking in public, and disorderly conduct.

In the meantime, vendors on both sides of the border will continue to sweat it out.

“I just keep thinking about what I’d do if they close the border,” said Maurico Penaloza, another San Ysidro vendor. “I’d have to spend what little I have saved up, find a new job, or leave Tijuana altogether.”