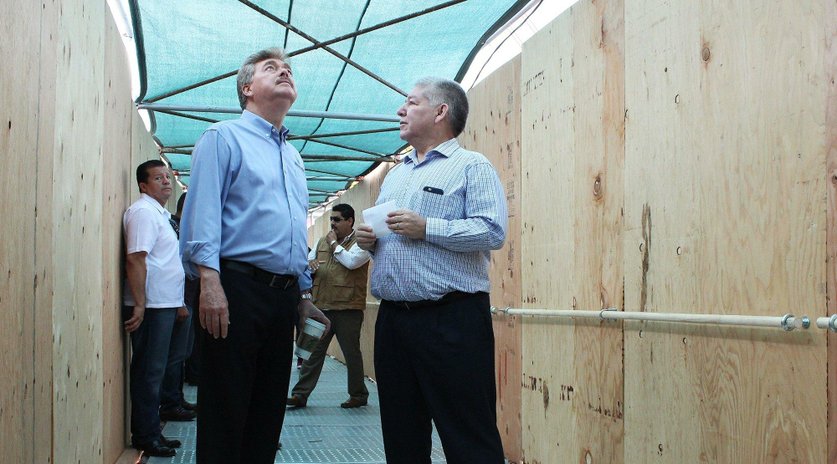 This month’s opening of a much-needed pedestrian border entrance from Tijuana to San Ysidro has been cause for celebration north of the border. But in Baja California, there has been mostly uproar over the quality of a temporary structure built by Mexico’s federal government to access the new U.S. PedWest facility.

After nearly two weeks of public pressure from Baja California politicians, the business community on both sides of the border and pedestrian border-crossers, Mexico’s federal government on Thursday announced that it is stepping up its construction schedule for a permanent structure. It is now slated to open in September, rather than the previously announced December opening.

“We are accelerating things,” said Luis Fernando Morales Núñez of INDAABIN, the agency responsible for building federal facilities in Mexico.

Some 20,000 northbound pedestrians cross the San Ysidro border each day, and the addition of the PedWest crossing is seen as key to improving their experience. Its timely opening was among the priorities of a binational delegation led by the San Diego Regional Chamber of Commerce that traveled to Mexico City in April.

The temporary Mexican walkway, about 500 yards long, leads from a pedestrian bridge that spans the Tijuana River into Mexico’s El Chapparal port. The structure consists of scaffolding-like sheets of stainless steel with supporting beams and wood supports, enclosed with loose metal wire fencing. Critics say it is not only unsightly, but unsafe and difficult to navigate, particularly for the elderly and handicapped.

INDAABIN engineers have insisted the structure is safe and adequate until a permanent one is completed. But in Baja California, the provisional walkway has stirred feelings of resentment that the border is not a priority for Mexico’s federal government.

“They don’t understand us,” said Ernesto Ruffo, a former Baja California governor and currently a federal senator. “They are not living at the border, they are not watching the daily challenge of moving that many people.”

Ruffo was among the legislators from Baja California who joined a Mexico City news conference staged by the Senate’s Commission of the Northern Border to call attention to the issue.

“Mexico’s federal government knew about this for two years,” said Max García, a federal congressman from Tijuana, who criticized the temporary structure as poorly constructed and located in an unsafe area near the Tijuana River channel.

While INDAABIN has been taking the brunt of the criticism, it is higher-level officials in Mexico’s Interior Ministry who “dropped the ball” on PedWest, said Ruffo. “That’s where the Mexican government coordinates issues of the northern border,” he said.

The senator said the PedWest issue highlights the need for reviving a border office that more effectively coordinates Mexico’s executive branch with mayors and governors of border states.

With 14 lanes — 12 northbound, and two reversible — PedWest is seen as a critical component of the $741 million reconstruction of the massive San Ysidro Port of Entry, overseen by the U.S. General Services Administration. Without the opening of PedWest, authorities could not demolish an existing pedestrian facility east of the vehicle lanes and start building a new eastern entrance.

The timing of the opening of PedWest has been a sensitive issue, and diplomats from both the United States and Mexico have been reluctant to discuss it publicly.

The GSA announced in January that it planned to open PedWest in June. But in March, Baja California authorities learned that INDAABIN lacked funds to complete the permanent structure.

While INDAABIN is the supervising agency on the project, the Mexican military is in charge of construction. Following a petition from INDAABIN’s president, Soraya Pérez, “we were able to get a commitment” from the military to step up the construction schedule, Morales said.

In the meantime, INDAABIN is making some alterations to the temporary structure, as recommended by a Baja California engineering firm, ICH Group. “These will be completed, at the latest, by this Sunday,” Morales said.

For as long as the temporary structure is open, INDAABIN staff will remain on site 24 hours a day, he said, and help anyone in wheelchairs or others who have a difficult time navigating the walkway. And pedestrians with complaints will be able to speak directly to an agency representative.