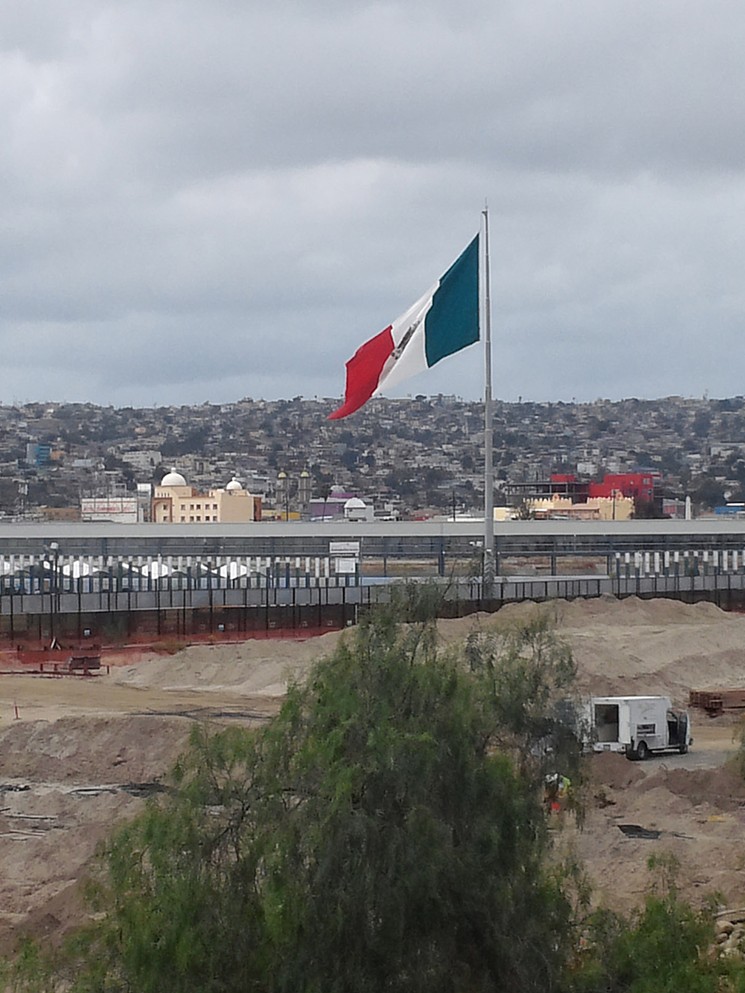 These are all responses I got to a Facebook post asking for suggestions for my first trip to Tijuana, Mexico.

None of them was helpful.

As we pull up to the border crossing in San Ysidro and park, our Mexican driver points out the Mexican flag whipping in the breeze and announces, «We’re walking over.»

There’s a startling amount of construction going on near the port of entry. I thought Donald Trump’s threatened wall was on hold, but it looks like something’s happening. I ask our driver if it’s wall preparation, and he tells me it isn’t; they’re working on smoothing out the entrance and exit into Mexico.

It takes us about 10 minutes. Passports are stamped quickly, and we step into Tijuana.

Continuing along a cement walkway, a yellow line of taxis, the drivers standing around and chatting with one another, blocks our way. When I ask our driver how much, he tells me, «I’ve got it. Everybody get in!» My husband and I sit in the front seat with the taxi driver, while our American driver climbs in the back with the other three travelers on the tour. There’s no room for him to sit, but he’s short, so he stands and bends over them, leaning an arm on the back of the front seat, while resting his ass against the side window.

It’s cramped, but everyone is giddy with laughter as the taxi speeds down to the Avenida Revolución, the infamous playground of American coeds for decades. None of us wears a seatbelt, and visions of bloody accidents, broken glass, and twisted metal burn through my head. We dodge cars, my hand against the roof, bracing myself as a couple of bumps levitate us an inch or two off our seats. It’s quick and, relatively, painless.

We walk under the white Tijuana arch, the large wide-screen TV embedded in its wires playing commercials, and our driver informs us we’ll inevitably be hit up by a series of donkey vendors to take pictures. He’s telling us not to pay too much now because he won’t say anything at all if we’re approached. He doesn’t want any issues with the vendors.

The first shop we go into has everything we could hope for: lucha libre masks, plastic saints, wood carvings, blankets and colorful ceramic iguanas. When the store manager offers us 40 percent off, I ask if hating Trump gives us a larger discount. «You hate Donald Trump? What a coincidence! So do I!» he says. «Did you hear that they’re already talking about impeachment?»

We walk away with two Day of the Dead skeleton figures, a refrigerator magnet and a matching pair of ceramic fish. We were so entertained by the conversation we didn’t bother to check whether we got a few more points off.

The driver asks if any of us need prescriptions filled, as he knows people who would help. Normally, I would have assumed this was all about his kickbacks from individual vendors—he glad-hands and chats with shopkeepers and restaurateurs, walking away with meals and trinkets, all without dropping any cash that I can see—but his comments about helping people seem to come from a personal awareness of the high cost of health care.

Stepping into a café, we drink beer and eat chicken and shrimp fajitas. The service is attentive and professional, the bland American salsa on the table traded out for something that made my teeth burn when someone overhears me saying it wasn’t very spicy. Our driver tells us the cook makes $35 per week at her job; her daughter—who is serving—makes about half that.

People-watching, we spot schoolkids with backpacks; Mexican boys dressed like Morrissey; a handful of white tourists; a steady stream of Asians; black men, in pairs and alone, speaking a dialect I don’t recognize. Our driver tells me the men are Haitians, who’ve been coming to Tijuana since the earthquake in 2010. They show up at the U.S. border without the proper papers and get stranded. Mexican organizations reach out to help, putting the refugees at odds with poorer Mexicans also in need.

After a few hours, we leave, turning down an alleyway onto side streets. Despite the city behind the city not being as freshly painted or as well-marked as shops on the Avenida, there’s much more creativity on display. In just the area we walk through, there are brightly painted murals, graffiti, more Mexican primary colors, handmade stuff not from a sweatshop, glassware, beads, bracelets, Baja jackets, and boxy fairytale and superhero piñatas.

We pass under the sign telling us we’re heading back to the U.S. and thanking us for coming, and we begin climbing stairs toward the exit. I’m hit with the smell lurking past the Plaza Viva Tijuana: piss. There are puddles of it from drunk Americans knowing they’re going to have a long wait heading back over the border. It’s disgusting, disrespectful and not surprising.

The line to get back into the U.S. is the longest wait.

The cement walkway feels as if you’re in your average airport, but it leads to a spiraling circle downhill to U.S. Immigration. At the top, I look to the left over the expanse of homes crammed tightly together on the Tijuana side, it’s grayer, bigger and more crowded than the section we toured. To my right is the U.S.: open space, green grass, box stores and Panda Express. Separating the two is an expanse of wall already built, two U.S. border guards nearby, leaning on their truck.

I look down. The new entrance into Mexico has been built side by side with the entrance into the U.S. It’s not open yet, so it’s still pristine, shiny. The long corridor begins in darkness, leading to high metal turnstiles and walls topped with razor wire, a forbidding goodbye.