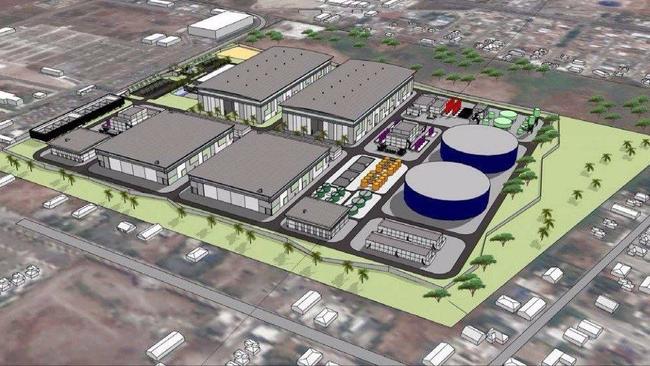 With Baja California pushing forward on its plan for a massive desalination plant in Rosarito Beach, a ground-breaking proposal to pipe some of that water to the United States has overcome a key hurdle.

The U.S. State Department’s approval of a presidential permit marks a step forward for the Otay Water District and its vision for a cross-border pipeline to import the desalinated water from Mexico.

“We have electric lines, the largest crossing in the world, a gas pipeline, a bridge from the airport,” that cross the border, said Mark Watton, general manager for the Otay Water District, which serves some 220,000 residents of southeastern San Diego County. “It’s only natural that we have a water line.”

Watton said the presidential permit approval on May 16 marks “a giant leap,” toward making his district the first in the country to import water from Mexico. The district’s $30 million pipeline project “would provide a new drought-proof water supply to its customers,” reads a statement from the district.

But making the plan a reality will require many more steps — the great majority of those in Mexico. For starters, the Rosarito Beach Desalination Plant has yet to be built, though Baja California authorities said last week that they are on track with their plan to complete the first phase in 2019 and the second phase in 2024.

At full build-out, the proposed $463 million reverse-osmosis facility would be the largest desalination plant in the Western Hemisphere, twice the size of the Poseidon plant in Carlsbad, producing up to 100 million gallons of water daily.

Though Watton said he has been in talks with Baja California officials about the possibility of purchasing some of that water, the state’s chief water planner denied the existence of a plan to send any of the desalinated water across the border. “The water is for Baja California, for our municipalities,” said Germán Lizola, who heads the State Water Commission, in an interview last week.

Like San Diego, Tijuana is heavily reliant on the Colorado River, whose water is piped across the state and currently makes up more than 95 percent of the city’s supply. And like San Diego, Baja California has been striving to diversify its water sources in its Pacific coastal regions — from Tijuana to San Quintín. Gov. Francisco Vega de Lamadrid has seen desalination as the solution.

Later this year, the state is planning the opening of a desalination plant in the port of Ensenada that would produce 5.8 million gallons daily, Lizola said. It is also preparing to launch construction of a similar-sized plant in San Quintín.

North of the border, the Otay Water District, whose southern boundary abuts the Mexican border, has also been looking for alternative water sources. The district has spent $4.1 million so far studying on the Mexican option, Watton said. “Just like a lot of water projects, you have to invest some money to see if they’ll pan out,” he said.

“We’ve had an expression by the state (of Baja California) in the past that all things being equal, they would like to have an export market,” Watton said. But there are no commitments at this point, he added.

The idea of building a desalination plant in Rosarito Beach has been around for decades. But it became a concrete plan last August, when the state signed a contract with a consortium under a private-public partnership agreement to build the the plant and operate it for 37 years.

The private group is comprised of NSC Agua, a Mexican company that is the subsidiary of a Cayman Islands-based Consolidated Water, together with two partners: the French company Degremont, and NuWater of Singapore.

To move forward, some conditions still need to be met. A filing last month by Consolidated Water with the U.S. Securities and Exchange Commission stated that these include obtaining rights of way for an aqueduct, Mexican federal approvals for Baja California to receive and distribute seawater; federal permits to discharge residual water from the desalination plant; and financing for the first execution of the project’s first phase.

The company also has asked the state of Baja California for an increase in the water tariff “to compensate for significant changes in foreign exchange,” a company statement said, adding that it hopes to launch construction in the third quarter of this year.

The project has the backing of the North American Development Bank, a binational institution that evaluates and supports infrastructure projects on the U.S.-Mexico border. “We remain optimistic that the plant will come to fruition,” read a statement sent Friday. “In addition, we remain confident that the Bank will leverage private sector financing for the construction.”

In case Baja California agrees to sell some of its water with the completion of the second phase in 2024, the Otay Water District is proposing its own tandem $30 million project. It is called “Otay Mesa Conveyance and Disinfection System,” and consists of a pump station at the border, a pipeline to carry the water to its reservoir and an ultra-violet water treatment facility.

The recent granting of the U.S. presidential permit has buoyed Watton’s hopes that the project can move forward. The permits are issued by the U.S. State Department for cross-border projects found to be in the national interest, and require consultations with federal, state and local agencies and the solicitation of public comment.

While most of these permits involve land border crossings, they have also been granted for seven cross-border pipelines carrying petroleum products. Watton said his permit is the first that involves a proposal to import water from Mexico.

The permit was opposed by U.S. environmental groups — the Surfrider Foundation’s San Diego Chapter as well as Imperial Beach-based Wildcoast, which cited concerns about the future plant drawing from contaminated water off the Baja California coast. In recent months, Baja California has announced a series of projects that aim to clean up the Tijuana coastline.

South of the border, opinions are mixed about the plan for the Rosarito desalination plant. Some question the hurry to complete a project of that magnitude — at full capacity it would supply water for more than 1.7 million people — nearly the size of Tijuana’s current population. They argue the state ought to put more effort into water reuse projects.

But others contend that the desalinated water can be a new source that can reduce Tijuana’s vulnerability if an earthquake damages the Colorado River aqueduct. A desalination plant, proponents say, can increase the region’s economic potential.

“Water has always been a barrier for Tijuana’s growth,” said Cesar Romeo Sauceda, head of Tijuana’s Chamber of Construction and Industry.

Romeo has heard talk about the possibility of sending some of the water to San Diego, and would not necessarily oppose such a plan. “I think it’s part of being neighbors, of having commercial relations, it’s something natural,” he said.

Still, up to now, he said, “nobody that I know has officially spoken of selling some of that water to the United States.”