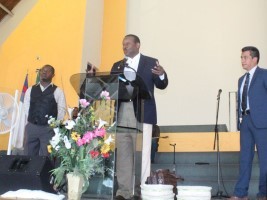 On a recent visit to Tijuana (Baja California, Mexico) to take part in the installation of the Belize Consul, a friend of Haiti, Haiti’s Ambassador to Mexico Guy G. Lamothe took the opportunity to visit Haitians from Tijuana.

Ambassador Lamothe met with Haitian (Amos Carrier) and Mexican (Manuel Serrano Nunez) pastors from the first Baptist Church in downtown Tijuana, which was the first to accompany the Embassy of Haiti in the documentation process of compatriots who wish to have a legal residence in Mexico. For over 10 months this church has been graciously serving Haitians, for the procedures for obtaining passports near the diplomatic mission in Mexico City and the passport unit of Washington. To this end, Ambassador Lamothe presented a plaque of “Recognition” to these two representatives of the great architect of the universe, in the presence of nearly 200 faithful of the Church.

Subsequently, the Ambassador visited a Haitian Rights Association led by Frantz Delice and in the late evening he spoke with the faithful of the “Iglesia del Cristo” led by Pastor François Navius, a young Haitian who lives in Tijuana for almost two years …

During his meetings, Guy G. Lamothe oriented and sensitized his compatriots while exhorting them to value the work of the Mexican administration, who kindly allowed them to reside legally on its territory.

Aware that many Haitians are not registered in the Register of Unique Identifiers of the Population (CURP) and receive a unique number like every Mexican citizen, which is essential to enjoy the benefits of formal jobs and be able to enroll in Mexican Institute of Security Social (IMSS) to benefit from the health program planned by the Mexican administration, he promised his compatriots to continue to negotiate with the Mexican administration for having registration at the CURP.

Ambassador Lamothe took the opportunity to recall that the Mexican private sector of Tijana will also have its role to play in this request and informed that he had already met with the President of the “Asociacion de Industriales de la Mesa” of Otay (a Neighborhood District in San Diego) on this topic.