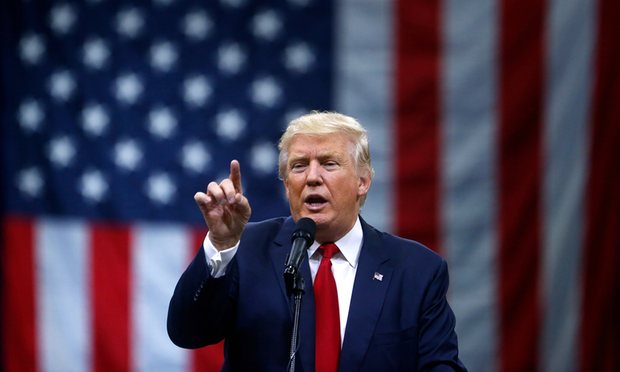 Donald Trump has claimed that there is a possibility of the US presidential election being “rigged” as he tried to divert attention away from a disastrous week for his campaign by also labelling his rival Hillary Clinton as “the devil” and praising the primary opponent of Republican speaker Paul Ryan.

The Republican nominee has in the past few days faced a barrage of criticism following his controversial comments about the Gold Star parents of a Muslim soldier killed in Iraq.

In response to an emotional attack on him by the parents of 27-year-old army captain Humayun Khan, who died in a suicide bombing, Trump had claimed to have made sacrifices equal to their son.A range of figures and organizations from across the political spectrum from John McCain to Barack Obama to the Veterans of Foreign Wars have criticized him for his comments.

But at rallies on Monday Trump declined to address that controversy and, in moments typical of his campaign so far, decided to ignite others.

At a campaign town hall in Columbus, Ohio, Trump said he feared that the election would be “rigged,” in an unprecedented statement for a major party nominee in modern history.

“I’m afraid the election is going to be rigged, I have to be honest,” he told the crowd.

He did not elaborate but later repeated the charge on Monday night with Sean Hannity on Fox News, saying: “November 8th, we’d better be careful, because that election is going to be rigged. And I hope the Republicans are watching closely or it’s going to be taken away from us.”

Roger Stone, a long time confidante of Trump, amplified these concerns in an interview with a far right wing radio show.

Stone said: “I think we have widespread voter fraud, but the first thing that Trump needs to do is begin talking about it constantly.”

Laying out a strategy for Trump to adopt, Stone added: “He needs to say for example, today would be a perfect example: ‘I am leading in Florida. The polls all show it. If I lose Florida, we will know that there’s voter fraud. If there’s voter fraud, this election will be illegitimate, the election of the winner will be illegitimate, we will have a constitutional crisis, widespread civil disobedience, and the government will no longer be the government.’”

He also promised a “bloodbath” if the Democrats attempted to “steal” the election.

On Monday night, Trump also escalated his rhetoric about Democratic rival Clinton. In a packed rally in a high school gym in Mechanicsburg, Pennsylvania, he called the former secretary of state “the devil”.

The statement came after Trump reiterated a frequent allegation of his on the campaign trail in recent days, that in endorsing the former secretary of state, Bernie Sanders made a deal with the devil. He went further this time, explicitly saying Clinton was the devil.

Donald Trump says Bernie Sanders made a deal with the devil.
In his hour-long speech to a cheering crowd of thousands, Trump hit a number of familiar notes. The Republican nominee made exaggerated claims about his poll numbers while railing against free trade agreements and criticizing Nato members for not “paying up”.

He also reiterated his praise for waterboarding to cheers. Trump complained of Isis: “They can chop off heads, they can drown people, they can bury you in sand and we can’t waterboard.” In the opinion of the Republican presidential nominee, “we’re not playing on a level playing field”.

The two new controversies ignited by Trump were the typical modus operandi of the Republican nominee when he is under attack. Instead of apologizing or backtracking, he has long thrown out a kaleidoscope of allegations in order to shift the news cycle to stories less damaging to him.

In the same vein, Trump surprisingly tweeted praise for Paul Nehlen, the long shot primary opponent of speaker Paul Ryan, who was running a campaign similar to Trump’s focused on trade and immigration.

The tweet marks a clear rebuke to Ryan, who, while endorsing Trump, has long been critical of the Republican nominee’s more extreme rhetoric as well as his support for a ban on Muslims.

Although Ryan put out a statement praising the Khan family on Sunday, he did not mention Trump. When asked for comment, Zack Roday, a spokesman for Ryan’s re-election campaign, said: “Rather than engage in a back-and-forth, the Speaker is going to remain focused entirely on ensuring we deliver strong Republican majorities this fall.”

Adding to an already febrile day in the Trump camp, it was announced he had also fired Ed Brookover, a senior aide who had formerly worked for Ben Carson’s presidential campaign.

A veteran operative, Brookover had served as the campaign’s liaison to the Republican National Committee after previously helping coordinate Trump’s delegate operations. Brookover is one several top campaign staffers to leave Trump’s campaign since he effectively clinched the Republican nomination, a list that includes former campaign manager Corey Lewandowski.

The Republican nominee was also quoted in an interview with USA Today saying that if his daughter Ivanka was sexually harassed, “I would like to think she would find another career or find another company if that was the case.”

Trump announced Monday that he had raised $35m in July, which he claimed was “unheard of for Republicans”.

Campaigns are not due to file reports to the Federal Election Commission until 20 August. However, if accurate, that figure would represent a decrease of $66m on the total raised by Mitt Romney in July 2012.