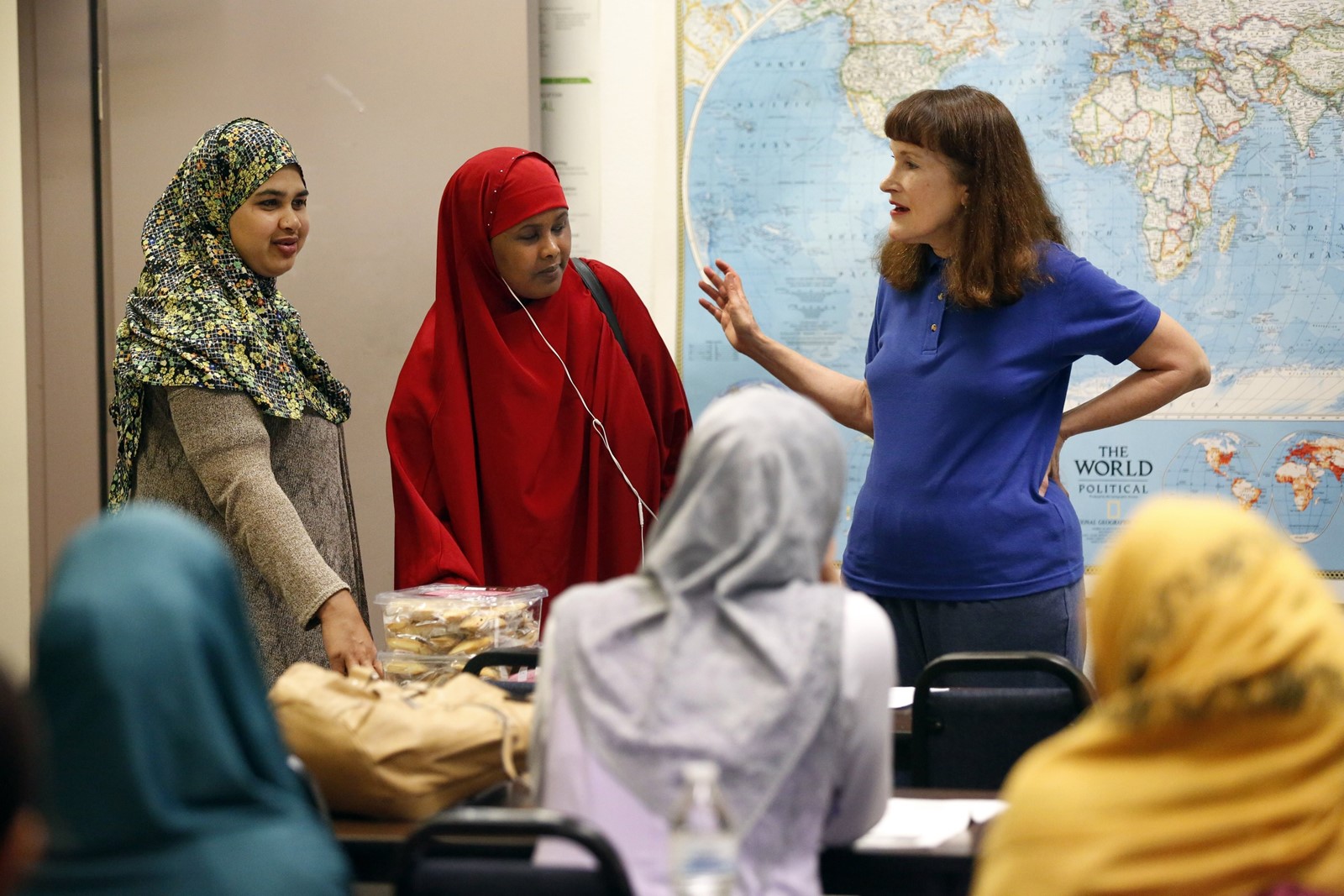 Shortly before 7:30 p.m. Thursday, the Muslim students in Mimi Pollack’s class quietly filed out of the room to pray, a nightly occurrence in the English-as-a-second-language course.

They returned a few minutes later as Pollack continued with the lesson, wrapping up a visit from a guest speaker.

Pollack estimated that she has students from at least 20 countries on her 48-person roster and that roughly half of her students are refugees.

Because of the program’s open enrollment policy, about half of those enrolled are there on any given night, she said. Those in attendance Thursday included students from Somalia, Afghanistan, Vietnam, Cambodia, the Ivory Coast, Uzbekistan, Myanmar, Venezuela, Mexico, Brazil and the Democratic Republic of the Congo.

“We have become like a little United Nations,” Pollack said.

The students’ time in the U.S. varied widely. One man had arrived about two months ago. Others had been in the country for decades. They had come for a variety of reasons. Some fled their home countries in search of safety. Others had married U.S. citizens.

Those in Pollack’s class who are not refugees were sympathetic to the experiences of their refugee classmates, and several had taken steps to try to support refugees amid what they see as a negative political climate toward refugees and immigrants in general.

Marisol Sosa, 41, came to the U.S. from Mexico in 1995 because of a relationship. Though that relationship ended, her desire to make her life in the U.S. did not. Because of the diversity in Pollack’s ESL class, she feels connected to refugees, she said.

“Now, I feel like my classmates are my family,” she said.

Before she met her refugee classmates, she didn’t understand what refugees went through to get here, she said.

“I came for a relationship, but they came for freedom of expression, freedom of religion, and that’s something different,” Sosa said.

Her classmates have inspired her to get involved in efforts to help the local community, she said.

“I want to tell people, ‘You are not alone. We are here for you,’” Sosa said.

Vinícius de La Rocha, 37, from Brazil, lives in Pacific Beach and — though there is an education center where he could take class — commutes to Mid-City to be a part of Pollack’s diverse classroom.

He was moved by his fellow students’ stories and decided to make a documentary about the refugees he has met. He partnered with Bettina Hanna, 38, whom he knew in Brazil before they both moved to San Diego.

The pair showed a teaser of their documentary-in-progress in Thursday’s class.

“We understand the feeling of being in a country you were not born in,” Hanna said. “We have difficulties on a daily basis.”

Hanna said she’s been in the U.S. for eight years and still feels that way.

“Every single day, I think about my situation because it isn’t settled,” she said. “It seems like it’s getting even harder with the president that we have right now.”

Nimo Mohamed, 26, arrived as a Somali refugee about 10 years ago. She has moved up from Pollack’s class to a higher-level English class, but her class joined Pollack’s on Thursday for a guest speaker.

She’s also taking classes at the Continuing Education building to pass tests for U.S. citizenship, she said. She hopes to go on to college to become a nurse.

She recalled her first experiences in the U.S. as terrifying because she could not communicate, but now she feels comfortable because of her English skills. She has had people tell her to “go back to your own country,” she said, and she does not like the current political messages about refugees.

“That’s breaking my heart,” Mohamed said. “I can’t even talk about that.”

She wished people would take the time to talk to her and to other refugees before making judgments based on their appearances, she said.

Kugonza Mumbere, 30, a refugee from the Democratic Republic of the Congo, arrived in San Diego in September with his wife and four children. They’ve since had a fifth.

He said at first everything was difficult, especially speaking and understanding English, but he’s made progress and feels more comfortable now. He was just hired for a housekeeping job that will start next week.

He said that when the administration of President Donald Trump tried to block refugees from coming to the U.S., he got scared again.

“I got the chance to come to this country where there is no war,” Mumbere said. “I was so scared. I was asking myself, ‘Where am I going to go now?’ Our country is still bad.”

Elena Norouzi, 20, from Afghanistan, said she works at a hotel during the day before coming to classes at night. She spends her spare moments painting and has dreams of being a professional artist.

“Nobody wants to be in other people’s country,” Norouzi said. “We had a problem; that’s why we come.”

She feels close to her classmates, she said. She liked hearing their perspectives in the documentary that de La Rocha and Hanna are working on.

“I know what they feel, and other people should know, too,” Norouzi said.

Linda Caballero Sotelo, executive director of the New Americans Museum, visited Pollack’s class on Thursday to talk about their shared experiences as immigrants.

“All of our stories combined should be included in the national narrative of America,” Caballero Sotelo said. “We have the same hopes and aspirations in common.”

She showed a short film by Evan Apodaca called “Que Lejos Estoy (How Far I Am)“ that talks about Apodaca’s search to understand his own identity in the evolution of his Mexican-American family.

When the film showed Apodaca’s grandmother remembering being told to go back to Mexico, Pollack’s students audibly shifted in their seats.

Caballero Sotelo talked with the class afterward about the struggle to maintain elements of a family’s heritage and culture as the next generation grows up in a new country. She emphasized the importance of sharing their stories with their children.

“If you’re going somewhere, it’s easier to know where you came from,” Caballero Sotelo said.

Pollack’s own life experiences have involved that struggle. She was born in the U.S. but moved to Mexico for her father’s work when she was a young child, she said.

She recalled speaking Spanish when her family was out but maintaining her English-language skills by speaking it at home with her family. She thinks that preservation was important and encourages her students to do the same for their children, she said.

Pollack has been teaching English in San Diego since she moved back to the U.S. in the early 1980s, she said.

She’s seen the faces of her classes shift from Southeast Asian refugees, both Vietnamese and Hmong, to those fleeing former Soviet Union countries after the wall came down in Berlin and then to Middle Eastern refugees pushed out of their home countries by more recent conflicts, she said.

She said learning about her students’ stories is a key component to being able to teach them successfully.

“You have to understand them as a human first,” she said.