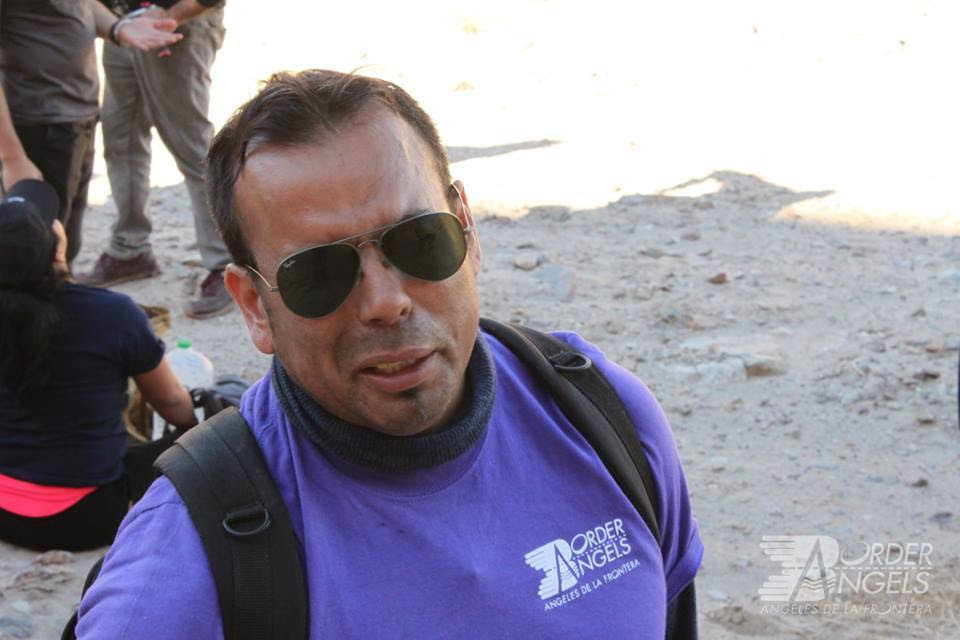 Hugo Castro is my friend, my compadre and a true Border Angel.

He was born in Salinas California 45 years ago and has dedicated his life in service to others. He is a father with three adult children and recently (one year ago) he honored me by asking me to be the God Father of his and his partner Gaba’s new son Gael and I watched his joy as Padre Alejandro Solalinde (Mexico’s National Human Rights recipient 2012) baptized him in a beautiful humble ceremony in Tijuana last year.

He like many of us, turned his life around when he saw the plight and suffering of the migrants as they struggled to better their lives crossing national and international borders looking for a life. Hugo, always living the Border Angels mission statement, when I was hungry did you give me to eat, thirsty did you give me to drink (Mathew 25:35}

On Saturday April 8, our lives all changed as I drove Hugo to Tijuana and he said good bye and left to join a pro migrant «via crucis» caravan from Mexico’s Southern Border to Baja California in support of refugees dignity, respect and human rights. Border Angels has a long history with caravans as we led 10 international «marcha migrantes» starting in February of 2006 which helped spark the national marches of the immigrant spring that same year. Hugo has been by my side on our «marcha migrantes» and for the last 3 years we have joined other caravans in support of their actions and that is why Hugo suggested we join this caravan as he volunteered to shuttle a car from Sonora to Mexico City to help prepare for the caravan. All seemed normal the first few days till that haunting facebook video from the side of a road in Puebla, where Hugo pleads for help as he states his life is in danger, he has been seperated from the caravan and his life has been threatened as has happened to him on previous occasions, but now we are seeing it live from just outside of Mexico City,  «necesito ayuda» help me.

The next day a mysterious phone call from a taxi in Mexico City, then silence, no contact, vanished. Gaba flies down to Mexico City to meet with the PGR, Mexico’s Attorney General. Hugo, found alive but in delicate health, his situation critcal. Border Angels is asking for help for Hugo’s medical attention and his well being. Concern has come in from all over the world, Hugo is loved everywhere. Hugo now begins his long recovery. One of our many projects Hugo is spearheading is building a wing (we will call it «Hugo’s wing») at a migrant shelter we have adopted at Tijuana’s Parque de la Amistad (Friendship Park) beach.

This Sunday, April 30, we «open the door of hope» again at Friendship Park, Mexico’s childrens day. We hope to also celebrate that Hugo is home safe and sound at our Angels Haven, as we have seen and lived especially these last ten days, love, has no borders. On behalf of Castro family and Border Angels family, thanks to all that have helped and continue to pray for Hugo, love, si se puede.