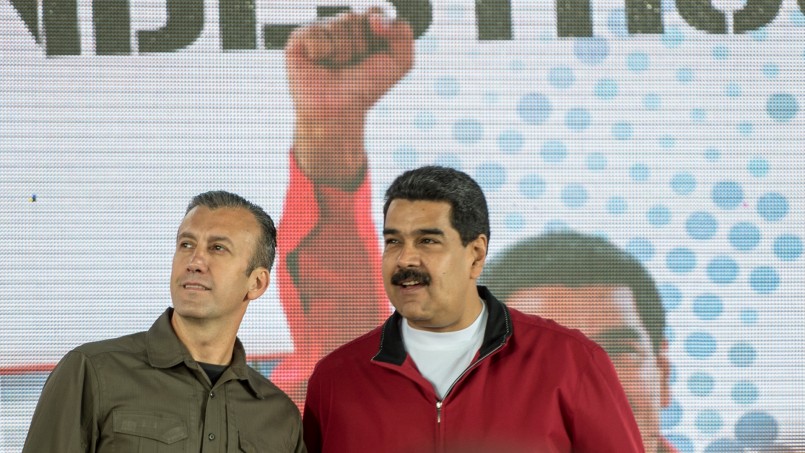 The United States seems determined to take a harder line on Venezuela. On Feb. 15, U.S. President Donald Trump called on the Venezuelan government to free Leopoldo Lopez, a Venezuelan opposition politician who has been imprisoned since February 2014. Trump held a meeting the same day with Lopez’s wife, Lilian Tintori, and U.S. Sen. Marco Rubio. Meanwhile, hints have emerged that the United States will soon move to level new sanctions against the Venezuelan government for officials’ involvement in criminal activity. But Venezuela will not accept more punitive measures against its politicians without a fight.

The number of prominent Venezuelan figures who have been accused of unlawful acts is growing steadily larger. On Feb. 13, Washington added Venezuelan Vice President Tareck El Aissami to its list of alleged drug traffickers. U.S. nationals and entities subject to U.S. jurisdiction are now prohibited from doing business with El Aissami and his suspected business associate, Samark Jose Lopez Bello. El Aissami is not the first Venezuelan official to find himself on the list of “specially designated nationals” kept by the U.S. Office of Foreign Assets Control (housed in the U.S. Treasury Department), either. Former Libertador Mayor Freddy Bernal, former Interior Minister Ramon Rodriguez Chacin and former military intelligence chief Hugo Carvajal are on it as well.

Venezuela will not take kindly to new U.S. sanctions against these figures or their peers. Instead, the country’s entrenched elite will probably close ranks to protect their own positions in power, especially as they scramble to address the pressing domestic challenges ahead. Venezuela’s economy is on the verge of collapse, inflation is estimated to reach a whopping 400 percent this year, oil production is declining, and the country is at risk of defaulting on its debt. Combined, these dangers threaten to spark massive social unrest, further destabilizing the already volatile country.

Still, the government’s ability to unite in the face of new sanctions largely depends on how much pressure the United States chooses to apply. For example, new sanctions could target Venezuelan state oil and natural gas giant Petroleos de Venezuela (PDVSA), limiting the ability of U.S. companies to do business with PDVSA or its refining arm, Citgo. This, in turn, would pose an existential threat to the Venezuelan government, which relies heavily on PDVSA for its income. Should this come to pass, enough dissatisfaction may build in Venezuela to prompt Caracas to push back on Washington’s demands.

Venezuela’s ideological orientation and geographic location have turned it into a nagging headache for several U.S. administrations. While in office from 1999 to 2012, Venezuelan President Hugo Chavez steadily allowed the expropriation of American firms’ assets, including upstream oil and natural gas infrastructure, without providing any compensation in return. To make matters worse, Venezuela has also served as a major transit state for Colombian cocaine heading to the United States.

For over a decade, some Venezuelan officials have even facilitated cocaine trafficking, a pattern that became more common after Chavez ended most of his country’s counternarcotics cooperation with the United States in 2005. Now, after years in power, some of Venezuela’s political elite have found themselves in a vulnerable position thanks to allegations of malfeasance that may subject them to the United States’ legal jurisdiction. Under former U.S. President Barack Obama, Washington opened a number of investigations into these officials, further souring its relationship with Venezuela even as its ties with Caracas’ ally, Cuba, improved. Venezuelan figures such as El Aissami and former National Assembly Speaker Diosdado Cabello came under close scrutiny for charges of cocaine trafficking, while PDVSA became the target of a money laundering investigation. The cases opened during the Obama administration could soon yield results under Trump’s, and it is certainly possible that more senior Venezuelan leaders will be indicted or fall victim to sanctions in the years ahead. What is unclear, however, is whether Washington will continue to limit its sanctions to individual politicians or broaden them to target the entities responsible for criminal activity, including Venezuela’s state-owned enterprises.

How Caracas Will Respond

Venezuela’s embattled administration has clung to power in spite of the extreme inflation and shortages of food and medical supplies that have plagued the country for nearly four years. For the most part, the government’s survival can be attributed to three things: a strong security apparatus, a divided opposition and a shared desire among many politicians to use public office for personal gain.

To be sure, the Venezuelan government — though resilient — remains divided into clear factions. But the country’s powerful politicians may temporarily overlook their differences in the face of a common threat, including a more aggressive administration in the White House. Additional U.S. sanctions and other punitive measures against certain people, therefore, could actually pull Venezuela’s ruling class together. On the other hand, if Washington were to slap hefty sanctions on companies that generate a sizable share of the government’s cash, it would put greater strain on the Venezuelan population at large, presenting a very real threat to leaders in Caracas. The prospect of significant sanctions on PDVSA, for instance, may spur Caracas to relent in its stalemate with the opposition and agree to hold regional elections in hopes of persuading Washington not to follow through with the measures. 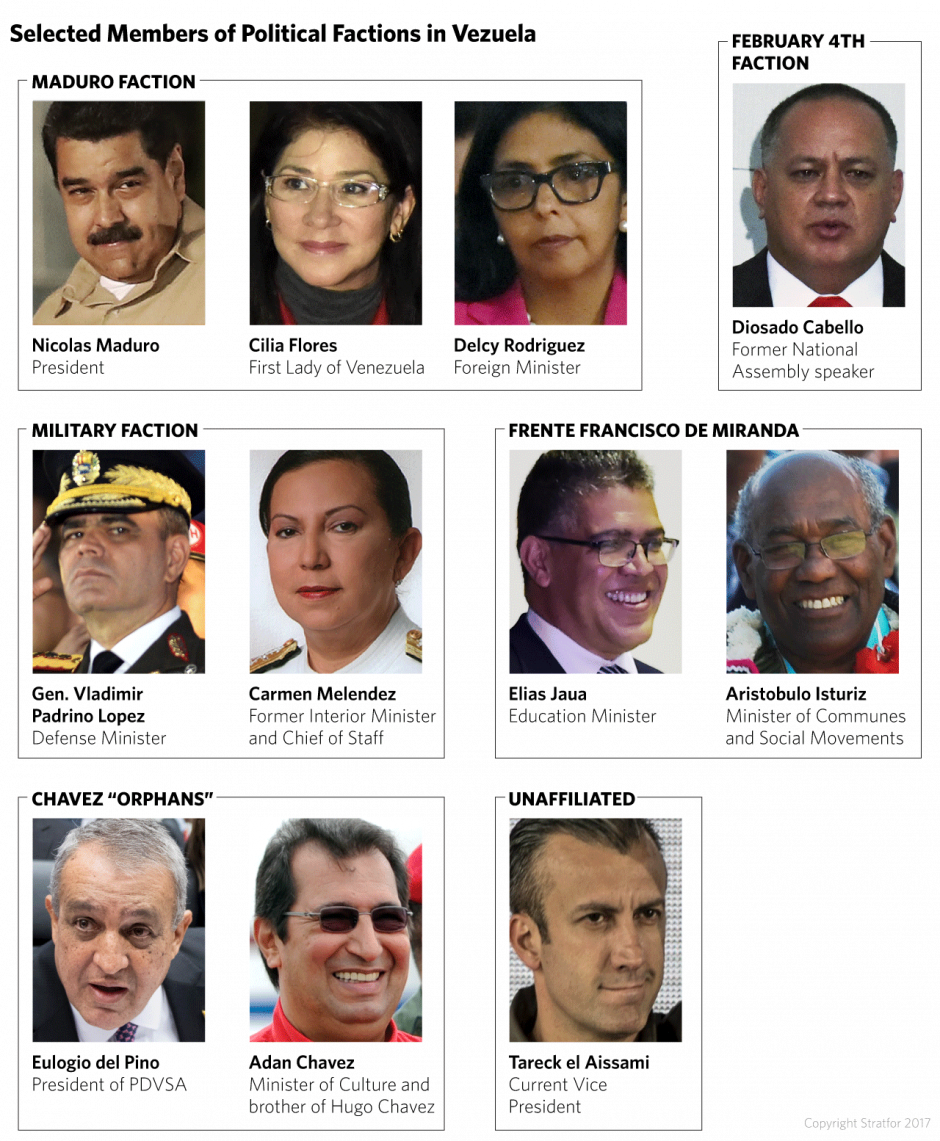 As it stands, political power in Venezuela is currently distributed among seven factions: those loyal to Venezuelan President Nicolas Maduro; the “Chavista orphans” who were loyal to Chavez but did not become fully incorporated into the Maduro government; former and current members of the armed forces in positions of power; civilian members of the United Socialist Party of Venezuela; the “February 4” faction comprising military officers who accompanied Chavez in his 1992 coup attempts; the Cuba-sponsored Francisco de Miranda Front; and unaffiliated officials who often serve as go-betweens among the groups. El Aissami, who is not linked to any faction, also seems to be trying to consolidate enough power to form a group of his own.

Of the existing factions, Maduro’s followers hold the most ministries. (They currently control 13.) Meanwhile, the military faction runs eight ministries, largely distributed among retired officers. Although Maduro’s faction is one of the strongest in the government, his continued rule still depends on the acquiescence of other groups, particularly the armed forces. The president’s bloc also appears to cooperate closely with the Francisco de Miranda Front, although the latter seems to have lost influence in the government since Maduro replaced Vice President Aristobulo Isturiz in January.

Despite these different alliances, all of Venezuela’s political factions would probably unite against a common enemy. But their cohesion will be put to the test if the United States adopts more sweeping punitive measures or if social unrest spreads in response to rising inflation or a debt default. Should Caracas default on its debt, Venezuelan imports would fall sharply, likely causing widespread protests to erupt within months. Efforts to contain the unrest may then widen the fissures within the government, causing criticism of Maduro to mount as policymakers’ options narrow.

If the United States chooses to toughen its stance against Venezuela in the months ahead, its effect on Caracas’ behavior will primarily depend on the outcome of the ongoing criminal investigations and the kinds of sanctions that can be put in place against the guilty parties. The effectiveness of those sanctions, in turn, will depend on whether Venezuelan leaders band closer together, or whether domestic problems like debt default and unrest conspire to pull them farther apart.