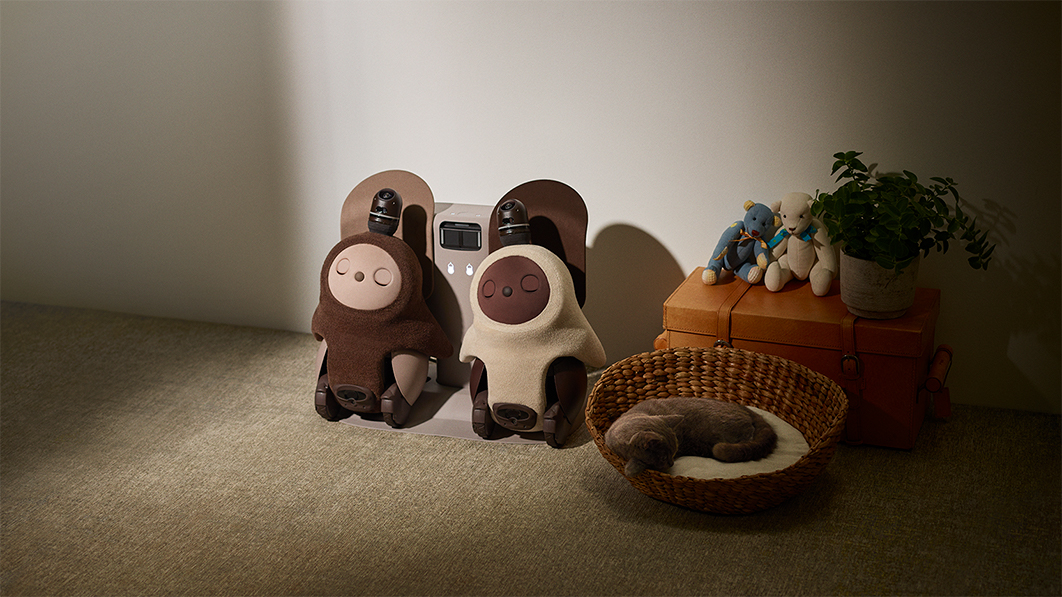 A new robot was introduced this holiday season with a different focus than that which we would normally associate with robots.  This new robot has not been created primarily with what we normally would think of as a work or task purpose.  Rather, it has been created to elicit love from humans who are evidently incapable of eliciting love from among each other anymore.  The robot is called a lovot, short for a love robot.  It has been created by Groove X, a Japanese company, and its short-term purpose is to create an intimate relationship between humans and the lovot. Supposedly, once the lovot elicits the capacity for love from the human, the human will then be more capable of loving all the people around him.

The lovot has flippers rather than arms, so it can’t lift anything.  It moves around on wheels.  It does have a camera on its head, so it can monitor children, other loved ones and whoever enters the house.  It looks a little like a Teletubby.  It’s operated with among other sources something called Emotional Robotics ™.  There are touch sensors throughout its body.  The eyes have a six-layered construction to create a sense of depth.  It’s a furry pseudo creature, about one and a half feet tall.  The product is sold in units of two, and as love grows between the two lovots, it can act as a model for the humans around them to love one another.

In all the years of doing this column, I think that this is one of the most misguided inventions that I have ever heard about.  The notion that just because an entity is furry and warm, moves around like a creature (on wheels) and, because of sensors, seems to respond to touch and to seek attention, that such an entity is some kind of mammal-like creature deserving our love is demeaning to humans.  Humans are supposed to love entities with an organic coherent sense of self.  This includes many vertebrates as well as other people.

So how is a machine going to teach humans how to love?  To be open to the sustained stimulation that a lovot has to offer, one has to be open to the mirroring and modeling that a lovot can potentially give.  And, of course, as we submit to this mirroring and modeling, we gradually become more and more like this modern complex behavioral entity.  And this means we become more and more robotic.  Our sense of self becomes reduced more to bundles of defined discrete data floating without grounding in an experiential vacuum and less to the organic cohesion that is so uniquely characteristic of higher vertebrates.  In other words, we have some self-definition, but we lack the internal cohesion to hold it all together.  We end up blurring together with this machine that is supposed to teach us all about love.

The real question is that, at this juncture of human history, why do we need non-humans, non-vertebrates to teach us how to love?  It certainly seems contrary to common sense.  The answer resides in the fact that we have already become so reconfigured by all the modern technology with which we have engaged, that we are having difficulties organically connecting directly with other human beings.  So now there are some of us who feel that an entity that is a type of the very technology that has hurt our capacity to bond with other people should be configured in such a way as to act as a mediator somehow to connect us again with other people.  Of course, rather than teach us how to bond with humans, all that will happen is that we will become more and more immersed in our robotic tendencies as we start to treat a robot as if it were a human.  In truth, it is a little like pouring salt on a wound.

What is needed is to pull away from those aspects of modern technology that are more optional in our lives such as recreational consumer uses of screen reality, and forcing ourselves to spend more time in the external world in primary experience.  It is a difficult proposition, because we have grown so addicted to screen reality.  And as more uses develop for virtual reality, an even more numbing experiential modality because it totally surrounds us, it will compete even more directly with external world reality as an experiential field in which to live.  By contrast, a tangible warm furry robot that has mass, matter and substance will almost seem like a source of organic experience.

This is why it is important that we start pulling back from mediated technological experience now before the reconfiguration of our minds by technology becomes so thorough and so fixed in place that we become totally robotized.  And, of course, warm furry robots like lovots make it more difficult to pull back, because they blur so effectively the distinction between humans and robots.  Which is why we should completely avoid getting involved with the lovots and not embrace them.