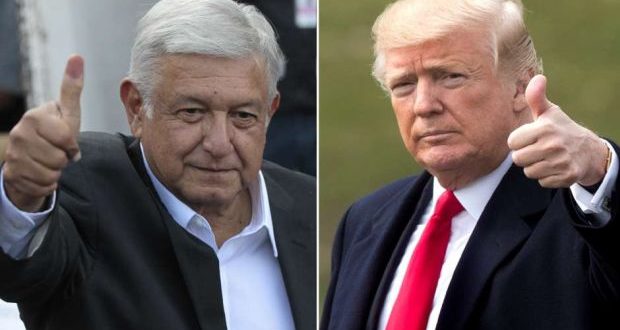 At every turn, the U.S. Administration tramples (or at least embarrasses) our southern neighbor. First, Donald Trump announced that he would build the wall and make Mexico pay for it. Then, he slapped Mexico with steel and aluminum tariffs and attempted to pull the rug out from under NAFTA. Now, he’s blaming Mexico for the U.S.’s faulty immigration system and threatened to add even more tariffs that would escalate throughout the summer.

In his final days, former Mexican President Peña Nieto (2012-2018) declared that “nothing and no one stands above the dignity of Mexico.” Vicente Fox, another former President of Mexico (2000-2006), was even more candid: “I’m not paying for that freaking wall!” Only he didn’t say “freaking.” But President Andrés Manuel López Obrador, known colloquially as Amlo, has said… well, nothing.

Could he be holding his breath for the passage of the United States-Mexico-Canada Agreement (USMCA), at which point he will unleash a stream of expletives on Twitter? That is a popular theory with pundits in Washington, but I’m not buying it.

I think that Amlo is disinclined to butt heads with Trump because the two are eerily similar. Despite his leftism, Amlo sees qualities in Trump’s leadership style and economic agenda that he respects and even emulates.

Amlo’s campaign promise to “purify public life” was strikingly reminiscent of Trump’s statement at the 2016 RNC: “I alone can fix it.” The actions Amlo took in his first 100 days have been accompanied by heaps of messianic rhetoric. Both presidents constantly imply that the problems faced by citizens will be rectified by the president himself, not the government as a democratic institution.

Both leaders have also expressed disdain for federal agencies and balances of power, all while touting reputations as decidedly and unapologetically nationalistic. Most recently, Amlo’s political party concocted a plan to restructure the 11-person Supreme Court to his advantage by adding 5 more justices.

When it comes to international relations, Trump and Amlo verge on isolationism and show a disturbing inclination to support undemocratic power. Trump has been downright affectionate towards Kim Jong-un, Supreme Leader of North Korea, and Vladimir Putin, Russian President (and infamous election meddler). Meanwhile, Amlo has chosen to back Venezuelan President Nicolás Maduro, whose authoritarian grip on that country exacerbates an ongoing humanitarian crisis.

I will concede that nationalism and disdain for checks and balances are not new concepts, nor are they uniquely Trumpian. In fact, in recent years, world leaders with these qualities have reared their heads on every continent, even in countries where Trump is loathed. But the Trump-Amlo duo has another concerning similarity: Both are promoting short-sighted economic agendas that are trapped in the past.

Amlo’s strategy to re-vamp the economy hinges on the construction of an $8 billion dollar oil refinery. He claims that building another mega-refinery will increase Mexico’s oil production and sustain the economy, an economic strategy from the 1960s. But the six existing refineries in Mexico are operating at 30 percent of their total capacity, the lowest output in three decades. Why waste money on another refinery when the country is underutilizing its current infrastructure? Not to mention, Pemex, the state-owned petroleum company, would not have the capacity to support the economy, even if seven refineries were fully operational.

Amlo’s refinery plan is similar to Trump’s emphasis on the coal industry. Most Americans have gladly shifted away from coal in favor of cleaner, more efficient, and more sustainable energy, yet the administration vows to reboot mining efforts. As Trump denies the science behind climate change to promote the industry, coal-fired power plants continue to shut down to make way for more economical production methods. Why would he dig his heels into an energy source that is inferior in every way?

Both Trump and Amlo are appealing to a base. The two are more interested in policies that make statements than policies that actually move the economy forward. Building a populist base of support is key to consolidating power, and that mentality lends itself to short-sighted economic policy.

Last July, in a classic outburst of narcissism, Trump privately referred to Amlo as “Juan Trump,” declaring the newly-elected president to be his Mexican equivalent. Amlo’s staunchly anti-neoliberal supporters rejected this nickname, but, ironically, Trump was right in more ways than one. Both leaders are undermining their own democratic institutions and failing to make investments in the future of the North American economy.

I don’t expect Amlo to stand up to Trump anytime soon, if at all. The two presidents are trapped in the 20th century and, ultimately, enable one another.

Cristina Antelo, Esq. is a Democratic strategist and principal at Ferox Strategies, sits on the board of the Congressional Hispanic Caucus Institute and is a recent alum of the Center for American Progress US-Mexico Leaders Initiative. Follow her on Twitter @MsCEAntelo and@FeroxStrategies