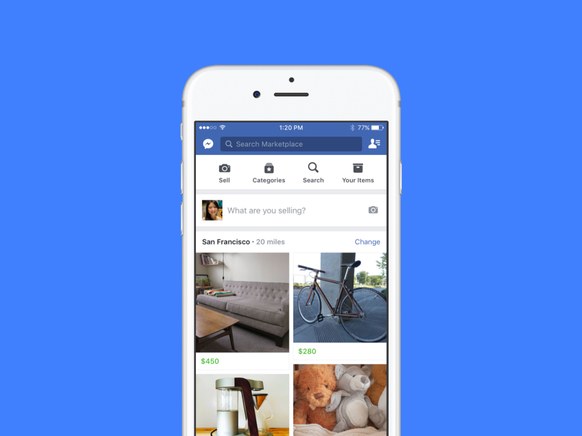 Facebook has launched Marketplace, a centralized hub where its 1.71 billion monthly users can buy and sell their stuff online within local communities. Yes, people have already been using Facebook for this for a long time. But Marketplace formalizes that casual function—and signals just how important these trading posts are for the company’s plans.

As many as 450 million people already use Facebook Groups as a community bazaar. Last year, Facebook even rolled out specific features to enable features like listing prices, marking items as available or sold, and easily viewing a catalog of previously sold items. But Facebook’s not just slapping a different name on an existing product. It’s making a pitch to be a safer, smarter Craigslist for the 21st century. And if Facebook can transform itself into the place where people come to buy stuff—in addition to all the other things people come to Facebook for—well, that’s a great sell to Facebook advertisers.

You don’t need a much better argument for Marketplace’s importance than its placement. The Marketplace icon will replace Messenger in the Facebook iOS app, giving it crucial real estate on one of the most popular mobile apps of all time. It gave Messenger enough traction to become a billion-user platform in its own right.

Tapping on the new shop icon at the bottom of the Facebook app—which will roll out to Facebook users over the next few days—yields a thumbnail grid of items that people near you have posted for sale. You can adjust the parameters of your search, using filters including location and range (say, “San Francisco, 20 miles”), category (household items, electronics, apparel, and more), and price. Facebook says that, similar to how it shows users relevant posts in News Feed, users will see products based on how they interact with buy and sell groups in News Feed, Groups, and through notification and search queries.

See something you like? Message the seller directly, and work out your purchasing arrangements. Facebook won’t get a cut of the profits, the company says, but it also won’t help facilitate payment or delivery of items in Marketplace. Anyone over 18 in the US, UK, Australia, and New Zealand will get access to Marketplace to start off with, with other countries coming soon.

Attempting to absorb whole swaths of the Internet is just what Facebook does. In this case, the company’s clearly targeting Craigslist, the de facto destination for online classifieds, but also sites like eBay and Nextdoor. What Facebook has over even those gigantic destinations? Its broad audience, says Jason Goldberg, vice president of commerce and content at digital agency Razorfish. “Facebook has the most users spending the most time in its ecosystem, predominantly using mobile apps,” he says. “Its reach is immense.”

It has a few other distinct advantages as well. You never quite know whether the stranger you’re chatting with on Craigslist has a legit offer, or if you’re wrapped up in a scam. Nextdoor’s focus isn’t solely on buying and selling; it’s possible that your ad for a couch could get drowned out by chatter about the next neighborhood luau. While eBay offers a wide range of e-commerce items, sometimes you want the convenience of driving to a neighbor’s house and picking up, say, an area rug right now. Facebook’s strong anti-anonymity stance, plus its great location data, makes this scenario possible.

Then again, Facebook hasn’t effectively monetized buying intent in the same way other tech companies have—something Marketplace is designed to change, says Goldberg. “If you type ‘pizza’ into Google, it’s likely you’re jonesing for a pizza,” he says. Pizzerias, therefore, jump on the chance to advertise their product on Google. Meanwhile, Facebook is already great at knowing things about you, your preferences, and your friends, even your political leanings. “This Marketplace is a perfect opportunity to build audiences you can sell to advertisers,” Goldberg says.

Better still, it’s capitalizing on existing user behavior, instead of forcing new ones. For Facebook, the most promising thing about Marketplace may be that it’s not a hard sell.